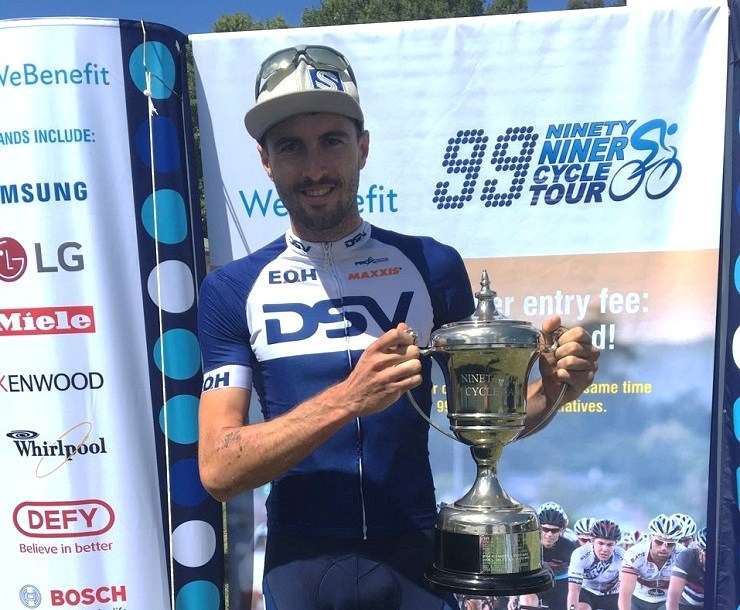 “I knew that my main competition would be Craig and Waylon as they’re known to be very fast at these Western Cape road races,” said the 99er champion.

“With them both riding for Specialized I knew I could get outnumbered easily, so I definitely marked them as my main competition for the day.”

The Stellenbosch resident said his goal was to get some good racing speed in his legs in the lead up to more mountain bike races in the next few weeks.

“I haven’t done a road race in a while and always enjoy doing them,” said Heyns.

“My goal was definitely to try and win it as I felt that, on paper at least, the finish would suit me.”

Heyns, who won the Elgin Valley MTB Challenge in August, felt that everyone was aware of the fact that the racing might come down to the final few kilometres.

“With the route finishing on a climb and with the Vissershok climb within 5km of the finish, everyone knew that it would come down to the final 10km, unless a breakaway could form well ahead of the last stretch. Many riders attacked but no one could really make it stick.

“Going up the Vissershok climb I was well positioned in the bunch and followed wheels until Craig attacked towards the top. I managed to get onto his wheel and we sprinted for the King of the Mountain prize which I was able to take,” he said.

Heyns added that they crested the climb together and he knew then that he would probably be able to do the same on the finish-line climb.

“Craig and I worked together until the last climb and maintained our gap over the chasers, but still held back a bit for the sprint up the climb.

“The last climb up to the finish was worse than I expected and I knew that Craig knew the finish very well as the defending champion. I let him lead out the climb as I was afraid of sprinting too early. We sprinted for the top where I managed to take the win.”

The DSV rider said he enjoyed the route, and especially the last 10km, as it had some good climbs.

“This makes for interesting racing, with possibilities of breaking away and doesn’t lend itself to big bunch sprints – something not many other races in this country have,” said Heyns.

He felt happy to have taken the victory and said it was pleasing to win a race that had been on the circuit for so many years.

“Being a mountain biker it’s nice to be able to win a road race. It was also good to get my first win for my new title sponsor.

“I’ve been in good form for the early season races but felt that luck wasn’t always on my side. I hope to keep the momentum going into the next few weeks of racing.”