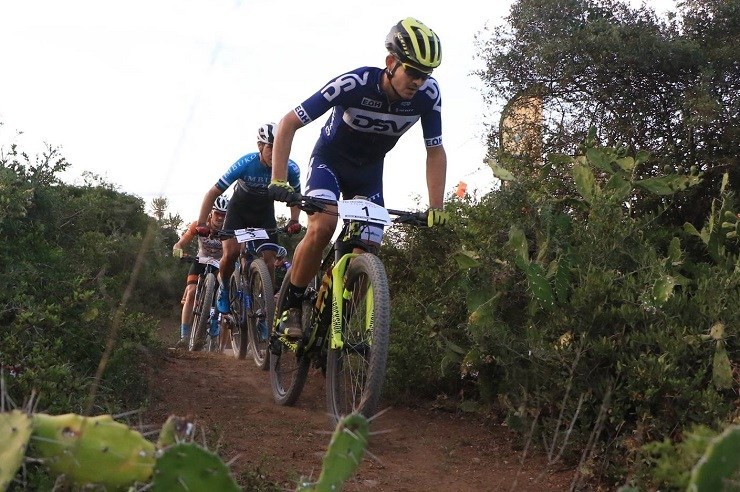 Joubert and Carstens, meanwhile, achieved a top result at the UCI-graded Tankwa Trek on the same weekend so they were fairly firm favourites heading into the Addo showpiece.

Despite this and being outnumbered, Du Toit managed to pip Joubert to the line in a time of 2:50:29.

“From the start I knew I was outnumbered so it was a bit intimidating. But my plan was to cover every move as quickly as I could,” Du Toit told In the Bunch today.

“I needed to avoid having one of them up front with the rest of them sitting on me.”

The 26-year-old said the trio launched minor attacks in the first half of the race, but nothing stuck due to that part of the course being flat.

It became clear to him on the Zuurberg Pass that the team were working for Joubert, who hails from the nearby Port Elizabeth.

Du Toit said he and Joubert broke away from the field with about 45km to go, less than halfway into the race.

“He knows the trails well and as soon as we started going down the long single track section after the big climb Marco started really applying the pressure,” Du Toit said.

“He’s a really good technical rider and I had a bit of difficulty following him. He rode really well down there until we had a four-minute gap at the bottom just from pressing [ahead] on the single track.

“It was a lot of fun following him there and it was tough, but I managed to stick with him. He was very impressive on the single tracks.”

He said after the technical descent following the Zuurberg Pass the racing became increasingly tactical between him and Joubert, while all the time they had to keep an eye on the chasing pack.

“He could argue that his teammates were chasing which meant he wouldn’t have to pull on the front. I was forced to do most of the work, or all of the work for that matter.

“But there were a few places where I looked back and I didn’t see them [Carstens and Sullivan] coming, so I was still able to ride a steady and conservative pace at the front.

“I was happy to take it to the line in a sprint against Marco.”

The Pretoria local said he passed Joubert on a left-turn heading into the final 200m stretch where he managed to take the right line at the right time.

“He opened up the sprint when we had to turn left onto the polo field. He went on the inside line where I think he took it too tight; he almost lost his front wheel.

“I just swung around from a wider angle and came out of the turn with a lot more momentum. I managed to beat him to the line.”

Carstens and Sullivan, after the leading the chase, subsequently placed third and fourth respectively.

Du Toit said the victory was essential for him in his current training block leading up to his big goal of the season, the Epic next month where he will partner Julian Jessop.

“It was good to carry on the momentum. It’s always good to be in a healthy mindset.”

Article By: In The Bunch