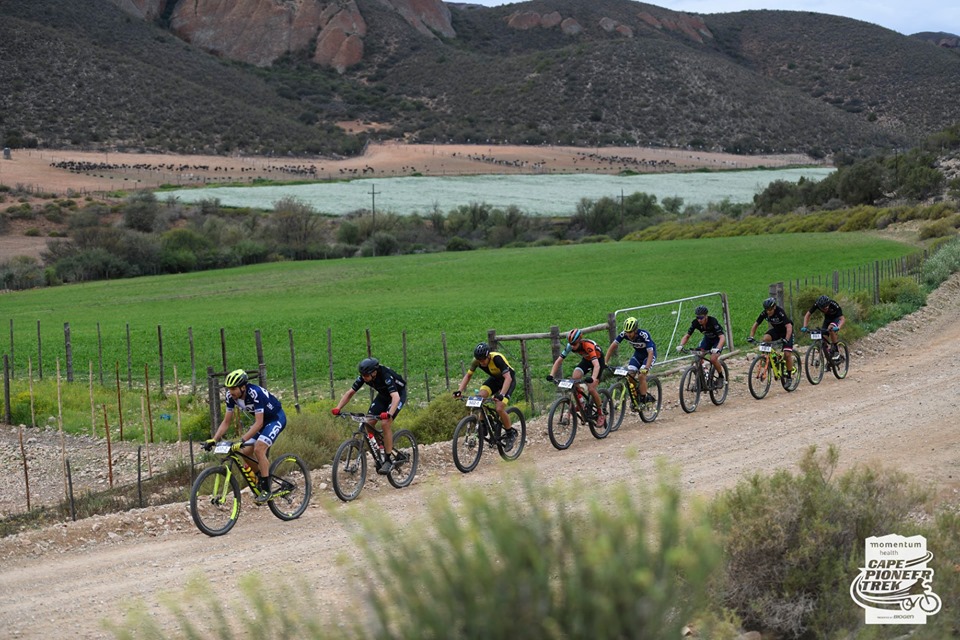 The fourth stage of the Momentum Health Cape Pioneer Trek presented by Biogen was by far the most feared. In what was described as the “Kammanassie Kanon”, riders were bracing themselves for the return of the Kammanassie – a mountain range in The Klein Karoo renowned for its sheer brutality.

Extreme weather conditions, however, forced race organisers to make a difficult call. Dryland Event Management’s Director Henco Rademeyer explained, “Rider safety is always our top priority. We simply could not risk sending riders up there without being able to reach them quickly in such difficult conditions.”

While the route became significantly less extreme than expected, the racing certainly did not. Imbuko Giant’s Marco Joubert and Nicol Carstens set out with steely determination in their quest for retribution today. The pair have been plagued with punctures for the past two days, and even with the overall victory now out of reach were determined to snatch up a stage win.

With the route change came a significant tactic shift. The flatter, faster route was expected to suit Team KMC’s Gerben Mos and Tim Smeenge, but as the yellow jerseys started falling off the pace their competitors took full advantage.

As riders passed the 50km mark, the sky got darker and the head wind got stronger. In the final 15km’s it was Imbuko Giant who opened up a two-minute lead.

Finishing the stage in second was a pair of new-comers to the podium – Jan Withaar and Henry Liebenberg (Absolute Motion), and then NAD MTB’s Hendrick Kruger and Nico Bell in third.

Team KMC will hold onto the yellow jerseys once again, but are now just eight seconds ahead of a lurking DSV Pro Cycling’s Gert Heyns and Arno Du Toit.