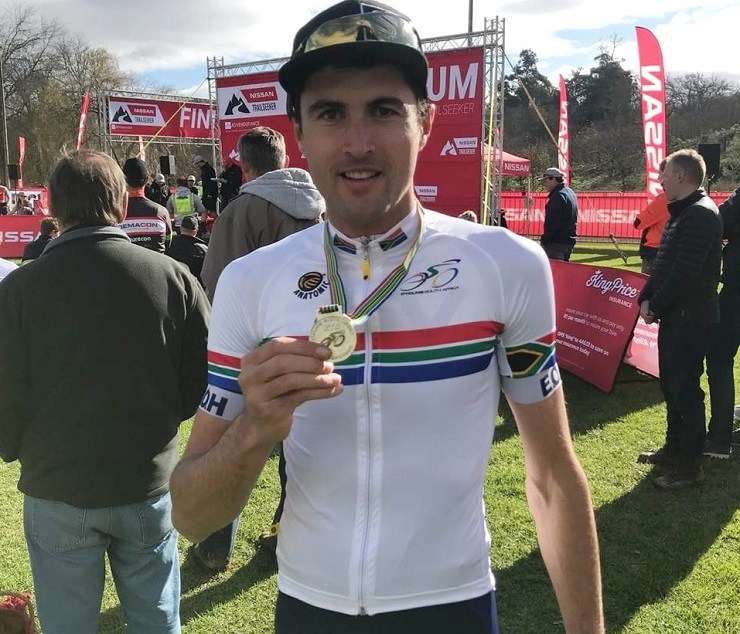 Gert Heyns continued his good form by winning the South African cross-country marathon championship in Grabouw yesterday, a race he described as “one of my main goals for the year”.

Heyns, who rides for DSV, was first in the Knysna Cycle Tour mountain-bike race two weeks ago and added the overall title in the USSA Cycle Championships last week.

The Stellenbosch University student topped a successful month with the national marathon title, beating Matt Beers of NAD Pro by just over ten seconds over 90km.

The race was almost a replica of the Knysna event, in which Heyns beat Beers by a mere second.

Beers praised Heyns after yesterday’s battle, saying the winner was a good sprinter with a strong kick. “I knew I was going to have my work cut out when we were together with 5km to go,” Beers said.

Heyns told In the Bunch today that he had set the marathon title as his main goal, “so to win it was a really proud moment for me. I’m very satisfied with how everything turned out.

“It’s really exciting that I get to wear the national jersey for the next year. To become your country’s champion means a lot for one’s career.

“Many riders come close, but don’t win it. I’m glad I have achieved it at least once.”

Heyns said the race had been “pretty hard” from the start as everyone tried to get into a good position before the first single track.

He was in a small group at the front in the first 20km before Beers “went hard” on the first climb, which split the field up.

“No one else was really able to follow him so I tried to bridge over to him. It was a hard effort, but luckily I made it onto his wheel.

“From there, we rode together for about the next 30km. I then tried to get away and got a gap a few times on the climbs, but he kept closing it again. He’s very strong on the flat sections and downhills.”

At that stage, Heyns said, he knew the race would come down to a sprint, just as the one in Knysna.

“It’s not always something I like to do, because something can always go wrong in a sprint. But I was quite confident. Fortunately I beat him in the sprint, on tired legs.”

Despite the stiff competition and the change in strategy, Heyns said he had enjoyed riding with Beers at the front.

“Matt went hard early on. I didn’t want to do that too soon, because it was a long race. That didn’t play out, but I knew I had to go with him.

“He always sets a good pace. I knew I would stand a good chance if I could keep up with him. He didn’t make it easy for me, but I’m glad that it all worked out,” he added.

Article By: In The Bunch